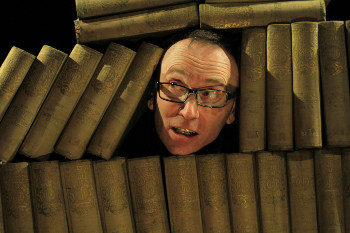 By Festival AdminFebruary 24, 2020No Comments

Mark’s essays and stories have appeared in The Reader, The Threepenny Review, The Guardian and the Times Literary Supplement. His Dickensian play, The Locksmith’s Wife was toured by Cube Theatre in 2009. Mark’s most recent play, The Spy Who Loved D. H. Lawrence was performed in Bodmin Barracks in 2018.

Each Christmas, Mark recites A Christmas Carol, with musical support from cellist and composer, Becky McGlade. The two are due to appear this coming winter in Bude. He is currently working on Something is Happening, a collection of monologues about his family’s old records.

These stories all revolve around his family’s old records and the memories they unlock of his childhood home. He performs with an old record player to hand, and a bunch of (fairly scratched) LPs and singles, some of them lovely and others – a bit iffy, to be honest. But somewhere, spinning deep within the grooves of the vinyl, you can still hear his sisters arguing, his dad complaining about the war and time itself unfolding at 45 revs. per-second.