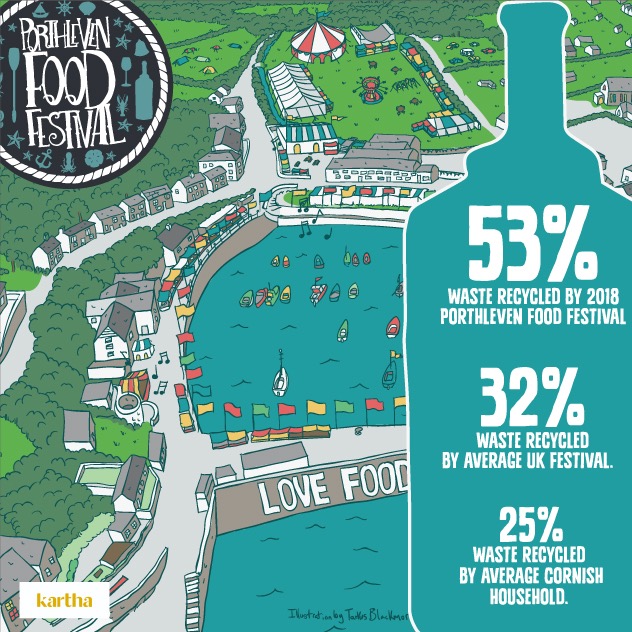 Record recycling levels at our 2018 event

We’re delighted to share the news that we’re leading the way for UK Festivals in terms of recycling our waste. Our 2018 figures show record levels of food and waste recycling at last year’s event.

In 2018 we responded to a request by local anti-plastic group Refresh Porthleven to make the theme Anti-Plastic. Fantastic! Alongside this we made a commitment to the way we deal with waste. This includes introducing rigourous food and container recycling and actively promoting Vegware or Bioware packaging, which was used by all vendors.

We achieved a recycling rate of 53% last year. The average UK Festival recycles 32%.

Festival Director Alec Short said: “Located where we are by the sea we are very aware of the impact of single use plastics on the environment. Many of the team are surfers and see first-hand the impact on the ocean in particular. We are committed to taking responsibility for the ways the Festival deals with its waste and will continue this agenda in 2019.

“The rate we achieved in 2018 is fantastic compared to an average of 25% currently recycled by Cornish households and the 32% recycled by the average UK Festival.”

The waste system we used in 2018 was run by Kartha and included:

The glass skip weighed 1.1 tonnes and was taken to a local transfer station who then bulk it up and send it on to a re-processor to wash, sort and put back into the glass market as products (probably new glass bottles). Most of this was collected from the bars but also all around the site, including that purchased in local shops.

The Dry Mixed Recycling containers – cardboard, plastic bottles and tubs, cans – generally average at around 40kg per container equating to circa 1 tonne collected during the event.  This was taken to Biffa’s Materials Recovery Facility to be baled, moved to their sorting facility, segregated, and then put back into the recycling markets.

1.8 tonnes of food waste were generated and treated in the anaerobic digestion system at Andigestion in Devon, which produces electricity, heat and fertiliser. This involved the placement of ninety 240-litre wheelie bins around the venue to collect food waste and for the first time in our 10-year history, stallholders, food outlets, bar operators and visitors had the opportunity to recycle their food waste rather than sending it to landfill.

Gareth Williams of Andigestion said: “We also had a stand at the event and were greatly encouraged by the high level of interest in food waste recycling. Lots of people were asking about what happens to the food waste that we collect – proof if needed that there’s a growing awareness of the importance of recycling and of the need to avoid sending it to landfill.”