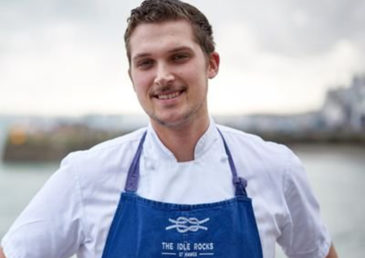 By Festival AdminFebruary 11, 2020No Comments

Tim began his career at Cornwall College in St Austell, where he studied for two years for a VRQ.

Whilst at college, Tim enjoyed a number of stages at various restaurants, including Rick Stein’s Seafood Restaurant in Padstow, working with head chef, Stephane Delourme, who has been a significant mentor for Tim and who offered him a permanent position as a commis chef.

After a year, Tim decided to move to London to work for Marcus Wareing, and was a part of the opening team at his restaurant, The Gilbert Scott, in the St Pancras Renaissance Hotel. He then took a position with Michel Roux Junior at the two Michelin-starred Le Gavroche.

After working in London for two years, Tim came back to Cornwall to take on stages Paul Ainsworth at Number 6, and Chris Eden at the Driftwood. In July 2014 Tim took a break from the kitchen before going back to the Seafood Restaurant in January 2016. In January 2017, Tim took on the position of senior chef de partie, working with Guy Owen, at The Idle Rocks in St Mawes. He was promoted to sous chef at the beginning of 2018, and to head chef in March 2019. In 2018 he won South West Chef of the Year award when he was Sous Chef at The Idle Rocks.

Tim recently took over the reins as the Chef/Owner at The Barley Sheaf in Gorran.